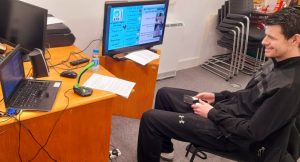 ATD community activist Andrew speaking to the students over Zoom

The workshop began with a discussion about what poverty meant to the students. We then showed our ‘What Does Poverty Mean?’ film, made for 2020’s 17th October World Poverty Day, which was followed by a discussion on how the film relates to Social Work. The facilitators highlighted positive practice by social workers, as we did not want to exclude the many positive experiences that people have with social workers. 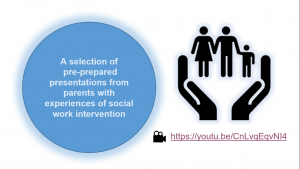 The second half of the workshop focused on statements from ATD community activists with direct experience of social work, including Gavin and Lorraine. They also read poetry they had written on the subject. Socio economic discrimination was discussed as an issue many faced when dealing with social workers. The unequal power dynamic between parents and social workers was highlighted, as well as the fear that many people feel towards social workers. 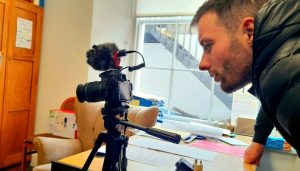 ATD community activist Gavin recording his section of the workshop

END_OF_DOCUMENT_TOKEN_TO_BE_REPLACED

On Wednesday 10th February, we held an online demonstration of our new educational resource, The Hidden Dimensions of Poverty. This tool is based on the international participatory research project ‘The Hidden Dimensions of Poverty’ by ATD Fourth World and the University of Oxford. It aims to educate people of all ages about the findings of this report and the process of participatory involvement of those with experience of poverty. Both the report and the educational resource focus on the aspects of life in poverty that are often overlooked. Those attending the online demonstration came from a diverse range of backgrounds, including…

Our project entitled ‘Does it Only Happen to Me?’ contributes to the wider campaign to have socio-economic discrimination recognised as a tenth ground of discrimination in the Irish Equal Status Act. ATD Ireland recognises the wider societal benefits of a #10thGround: a more equal society, fair opportunities for all, and reduction of hurtful stereotypes and discriminatory behaviours. Our Socio-Economic Status (SES) project offers a platform for members and volunteers of ATD’s network to provide a space for people who experience socio-economic discrimination to communicate their stories. We are beginning to see our hard work pay off as the campaign to end…

We recently set up a new poetry page. You can find it here.

Words by Mark Hogan I have had the privilege of participating over the last 20 years in the annual commemoration of the World Day for the Eradication of Poverty on the 17th October, first at the Famine Memorial and later at the nearby Human Rights and Poverty Stone, on the Custom House Quay, Dublin.With each passing year, I have grown in my understanding and appreciation of the significance of this important happening. For at its heart is a profound human expression which manifests itself in direct contradiction to our prevailing world order and its powerful inequitable forces. Instead, as is the norm,…

Words from Paul (ATD Community Activist)The UN say that Leave No One Behind (LNOB) is the central, transformative promise of the 2030 Agenda for Sustainable Development and its Sustainable Development Goals (SDGs)Why is the LNOB Promise important?The SDGs and the Leave No One Behind promise offer possibilities to everyone and give hope to the people who are often left behind. As this promise is people based and not just for the politicians, it opens the door for ordinary people to engage with and take ownership of the political process. This is heavily needed as we know government policies have a direct…

All Together in Dignity– ATD Ireland is seeking a motivated person to join their small and dynamic team for a 3 month internship starting mid January.  The internship is designed to give an opportunity for dedicated and talented individuals to gain experience working for the eradication of poverty, the protection of human rights, the prevention of discrimination and the promotion of the Agenda 2030 through a wide variety of grassroots projects.  ATD Ireland works with people who are living in, or have experience of, extreme poverty. ATD Ireland supports those dealing with homelessness, addiction, poverty and mental health.  This internship offers a great…

Philip Kenny, from Dublin Ireland and a member of ATD Ireland, wrote this poem to read out at the Famine Memorial and Poverty Stone on world hunger day 16th October 2020.As an active contributor to the ‘Liberties Lockdown Writing Corner’, Philip engages the reader with this vivid poem.   Black 47The crop is bad.No spuds to be had.Outlook bleak.Hungry and weak.The crop is bad.The plague is here.A sigh and tear.For hunger and fear.The crop is dead.Blackend is the beet.Hungry dying in the street.With nothing to eat.Corn for the rich.The impoverished suffer, impoverished suffer  By Philip Kenny Dublin, Ireland

The Irish 17 October Committee has some exciting news!   17 groups around the country are among those marking #17October World Day to #EndPoverty this year. Read all about it in the National #17October 2020 Programme Booklet published today.   The Committee wishes all 17 grantees every success with their World Day 17 October projects.   Supported by the DEASP @welfare_ie Public Awareness Funding scheme 2020.   See the booklet here: https://t.co/j5ZD7BH4A1   #LeaveNoOneBehind  #17octIRL

Global Theme — “Acting together to achieve social and environmental justice for all ” The theme for the Day this year addresses the challenge of achieving social and environmental justice for all. The growing recognition of the multi-dimensionality of poverty means that these two issues are inseparably intertwined, and that social justice cannot be fully realized without aggressively rectifying environmental injustices at the same time. Whereas progress has been made in addressing income poverty, there has been less success in addressing the other important dimensions of poverty, including the rapidly growing impact of the environment, within a more holistic approach. As the…