At a time when many European citizens are asking challenging questions about Europe, a group of people living in a situation of poverty and social exclusion set out to gain a better understanding of what Europe is doing to ensure that life improves for the most vulnerable members of society.

Over several months, they worked in partnership with others who were prepared to stand in solidarity with them, including people who held positions of responsibility at the European level.

Centring their discussions around contributions based on the life experiences of people living in poverty, they prepared themselves in order to be able to enter into dialogue with European members of Parliament and officials.

On 5 March 2014, at the ATD European People’s University, held in the European  Parliament in Brussels, they were given the opportunity to do so. This remarkable meeting, which was attended by 17 delegations from 10 different countries, was organised with the support of the Extreme Poverty and Human Rights Parliamentary Intergroup.

The meeting made it possible to build bridges between people who would not normally meet one another. They were able to think and talk together and to draft proposals designed to ensure that the eradication of extreme poverty and the fight against inequality are at the heart of the European project.

Read a summary of the proposals

As a member of EAPN Ireland, ATD Ireland supports also the EAPN call to candidates! 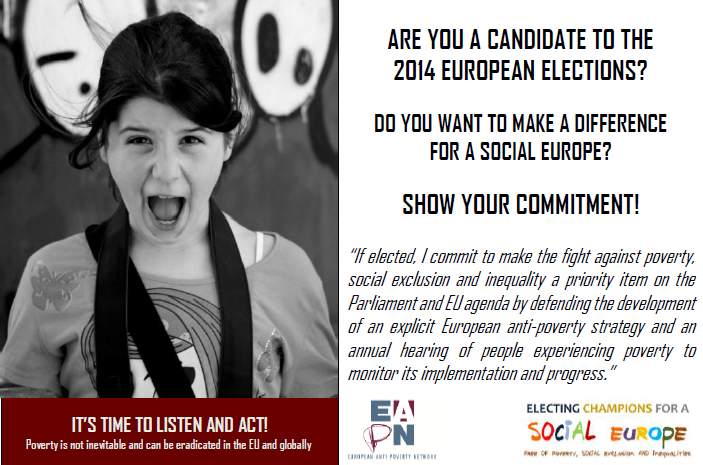 A Working Framework for 2030: Draft of the Sustainable Development Goals (SDGs) for the Post 2015 Agenda

Support Literacy Projects for Children in Manila and Youth Solidarity Projects in Dublin!

Irish President opening speech of the “European Year of Development” will inspire us for #action2015!!