“Whether he sings his love, pain, dreams or memory, the Human, between the lines, first sings for his thirst for dignity…  Whether in the Guatemala’s aldéas, as in Haïti’s dulls, or in African, Asian and European slums, everywhere I could hear families living in extreme poverty, singing for their dignity”

To celebrate the dignity of people living in poverty, to mark the 30th anniversary of the UN Day for the Eradication of Poverty , a series of concerts will be organised by ATD Ireland. This project entitled “When Voices Unite: Breaking the Silence to Leave No One Behind” is supported by a small grant from Impact Joe Lucey Fund and by the French Senate (thanks to Senator Hélène Conway-Mouret)

Our first concert will take place on Tuesday 11th April 2017!

It will be a great occasion to meet and sing together! Download the invitation! 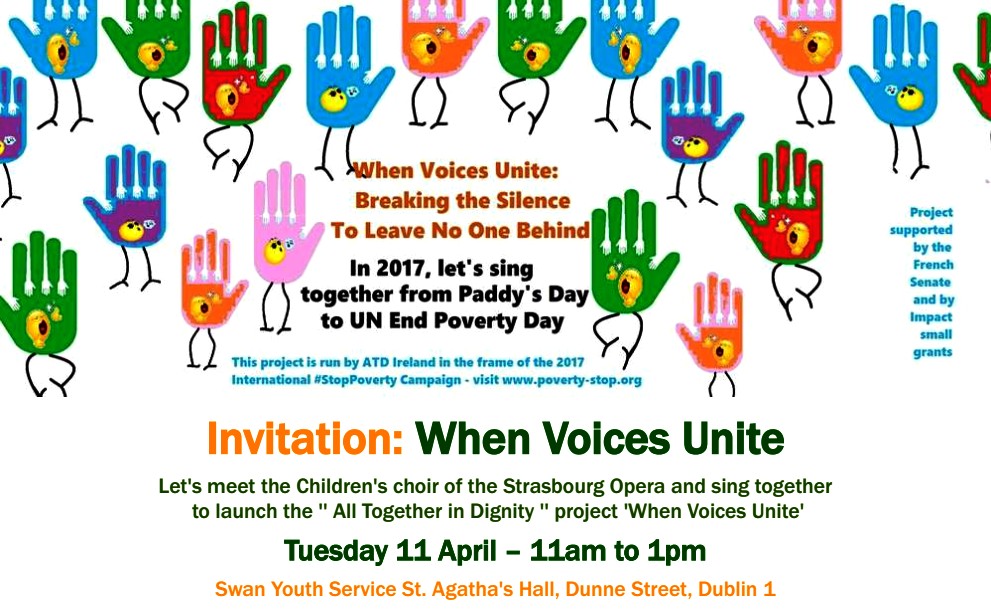 After  this first concert, singers and choirs in Ireland will gradualy join a global singing session, that will be held from the 15th and 17th October 2017. This event will be broadcasted by radios from all over the world. Together, people from all backgrounds will sing to speak out and unite their voices against poverty and social exclusion. Hundreds of choirs all over the world will sing a repertoire of popular songs.

The main objectives of this project are:

Towards the end of child poverty, together!