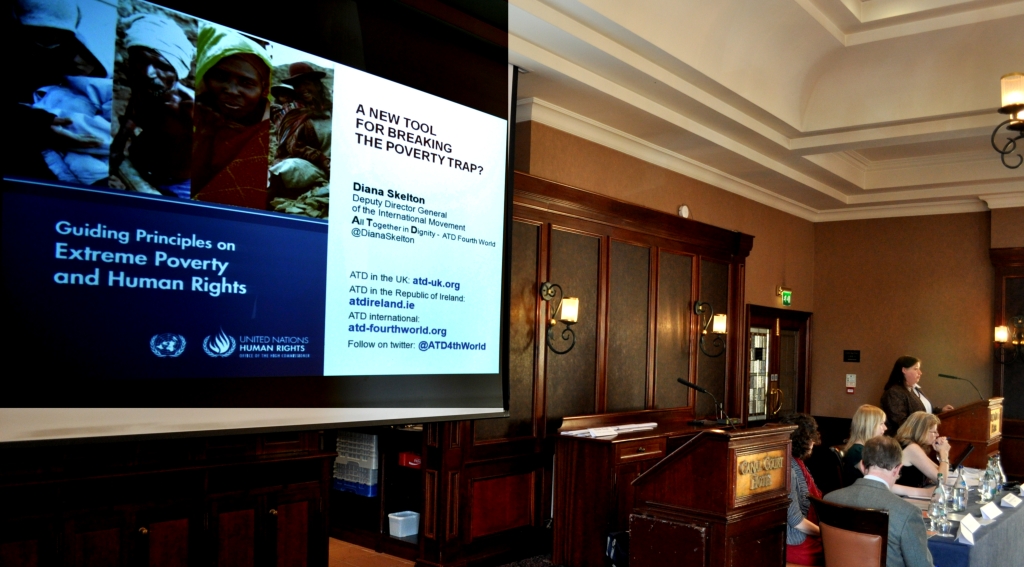 On the last day of the meeting of the International Committee for the Day for Eradication of Poverty (from 12th to 16th May in Dublin), Diana Skelton, Committee member from USA, presented the United Nations Guiding Principles on Extreme Poverty and Human Rights.

Responding to the invitation of the Irish Human Rights and Equality Commission Designate and the Northern Ireland Human Rights Commission, Diana Skelton was a guest speaker at the Conference “A Human Rights Approach to Tackling Poverty and Social Inequality – An All Island Perspective”.

“Adopted in September 2012 by the UN Human Rights Council, the Guiding Principles on Extreme Poverty provide for the first time, global policy guidelines. These focus specifically on the human rights of people living in poverty”, said Diana Skelton. “These Guidelines are a new tool for pratical implemention to the call for action given for the October 17 Day by Joseph Wresinski: ‘Wherever men and women are condemned to live in poverty, human rights are violated. To come together to ensure that these rights be respected is our solemn duty. ‘”.

The Newry Conference was the conclusive event of a very intensive week for the International Committee for October 17 gathered in Dublin.

On Monday 12th May, Donald Lee, President of the Committee announced the international theme for the 2014 commemoration day: Leave no one behind: Think, Decide and Act Together against Extreme Poverty.

On Tuesday 13th, the Minister of Social Protection, Joan Burton TD, met the Committee and said she was ready to ask the Irish representation at the United Nations to involve itself actively in the promotion and observance of the Day in New York and internationally.

Meeting the local community of the North Wall area in Dublin on Wednesday 14th, the Committee wanted to understand from first-hand experience what it means trying to leave no one behind when life is made precarious by poverty and social exclusion.

Women from the SAOL Project (Amiens Street, Dublin 1) gave examples of their lives: “The rent is behind and I owe my ma. Did I mention that she keeps digging us out using most of her pension?”.

Members of All Together in Dignity – ATD Fourth World (Mountjoy Square, Dublin 1) contributed also: “Leaving  no  one  behind means  bringing  back  a  homeless person to my home. I could lose my flat for taking this risk but I know what its like… I wouldn’t leave any of my family behind.  My  home is important  to  me  but  my  family is more important.” ” We have  to  understand  each  other.  To take  time  to  walk  in  each  others shoes. We have also to avoid stigmatising people who are in places like special schools. If they are put within the community,  and not outside, then we’re not leaving anyone behind”.

An account day by day of the  intensive week of work of the International Committee for October 17 can be found in the news section of the www.17october.ie website

Interns wanted for our “2017 Campaign” team!