Elaine Phelan
I am a social care worker of 20 years experience, working with people from diverse social backgrounds and primarily in homelessness and housing based projects. Having studied a Masters in Social Policy in 2005, I co-authored an article published in the journal Critical Social Policy on the governance of homelessness in Dublin. Coming across ATD Ireland over 10 years ago, I am happy to have become one of their first employees from January 2016 to March 2017. I continue to be involved in various regular ATD activities, including the uplifting singing group. I remain constantly challenged and warmed by the heart, values and action of ATD Ireland and ATD abroad in the alleviation of hardship and poverty.

Marie Williams
I’m  the director of the Dominican Justice Office, where I coordinate a peer-support project and network for women seeking asylum in Ireland and who live in the Direct Provision system. I hope my extensive experience in community development and project management in the area of intercultural integration, human rights and anti-racism supports the work of ATD Ireland. I’m passionate about Restorative Justice, Mediation and Conflict Intervention, and for over seven years was a Board member of Facing Forward, a voluntary organisation that promotes restorative practices, with a focus on serious crime. During this time, I worked as researcher for the report ‘Sexual Trauma and Abuse: Restorative and Transformative Possibilities?’, a joint initiative between UCD and Facing Forward.

Isabelle Pypaert Perrin
I’m native of Belgium. I joined the ATD International Volunteer Corps in 1981 and have since worked in many different countries in addition to Belgium. I helped build ATD local projects in a number of different cultural contexts in Europe, Central America, the Caribbean, and Asia. Particularly formative for me was the opportunity to be in ATD founder Joseph Wresinski’s personal assistants team for several years. Through my work with him, I saw how ATD’s people-centred work grows, person by person. I first joined the ATD International Leadership Team in 2008 and in 2012 I was asked by dedicated Committee of members of ATD to take the role of International Director General.

Juliette Péchenart
I am a French national who has been living and working in Ireland for nearly forty years. I retired from Dublin City University in September 2017 where I lectured in French and Business Ethics through French and chaired various BA’s. I started volunteering with ATD Ireland in 2015 as I was already familiar with the meaningful work of ATD in France. I’m inspired and humbled by the people I meet through ATD Ireland. In 2017 I was involved in the ‘If only you knew – Stories of change’ project. This is such a powerful testimony of courage, dignity and hope in the face of exclusion and adversity. It was also a great achievement for me and many other to prepare and edit “Voices for Dignity” throughout 2018.

Hugh Frazer
I spent most of my career working to combat poverty and social exclusion and promote community development. I’m really passionate about achieving a more inclusive, just, sustainable and equal society. I started as a community worker in Belfast, later I became director of both the Northern Ireland Voluntary Trust and the Combat Poverty Agency. Today I serve as an expert in the European Commission and coordinator of EU-wide networks of experts on poverty and social policy. I have written extensively about poverty, community development and community relations and I train students as adjunct professor in Maynooth University. In my spare time (when I find it) I paint.

Brian O’ Toole
I am a retired Primary School Teacher having spent most of my teaching career teaching in an all-Irish school in Dublin’s City Centre. I have a long involvement with the Society of the Saint Vincent De Paul and this began with my work in Sunshine House, Balbriggan where thousands of Dublin children were treated to an annual weeklong holiday during the summer months. In 1995 I became involved in the Community After Schools Project (CASPr) in Dublin’s City Centre where we run two after schools projects, a creche and an accredited training centre. I have been chairperson of CASPr since 1998. I now work part-time with the Presentation Sisters in Ireland and England as their Director at the Interprovincial Justice Desk where I represent them and their interests in a variety of fora and this now includes ATD. We are also represented at the UN with ECOSOC status and in this way my work at home has an international dimension. We have attended and been involved with ATD and their impressive work and events for the last two years and this has prompted our new, deeper involvement and collaboration with ATD. 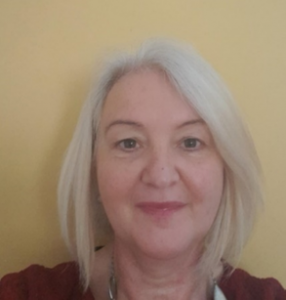 My name is Bernie Browne. I have been a volunteer with ATD Ireland for ten years. I work with the team and feel very fortunate to participate in such a sincere effort towards social justice.

I am a board member and work as an educator. I work with Rehab Group/National Learning Network at Roslyn College, Dublin.  In my role as College Foundations Instructor, I work with a group of people, towards their development in education and life.

ATD first came to my attention in 2015 through an interest in the SDG’s, which were a major educational program in ATD, who championed the Leave No One Behind campaign.  I am pleased to be the current treasurer and to help out with admin.  I ordained as a One Spirit minister in 2020 and retired from business in 2021 after sixty years.  I also serve on the MALEs Ireland elder council.  For relaxation I like to garden, read and play guitar.