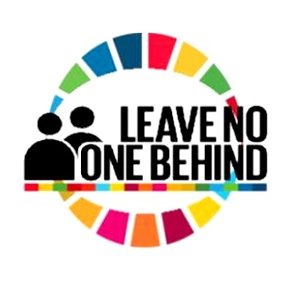 Why is the LNOB Promise important?

The SDGs and the Leave No One Behind promise offer possibilities to everyone and give hope to the people who are often left behind. As this promise is people based and not just for the politicians, it opens the door for ordinary people to engage with and take ownership of the political process. This is heavily needed as we know government policies have a direct effect on people, especially the people furthest behind. These policies therefore need to be influenced by the people that the policies effect the most. These goals are so ambitious and needed –  they cannot be left in the hands of the politicians alone. The people who are often left behind, those living in poverty and hardship – are the ones that need to be at the table! This promise gives hope to that which is why ‘Leave No One Behind’ is key to societal transformation.

All these goals especially Goal 1 ‘End poverty in all its forms, everywhere’, Goal 2 ‘End hunger, achieve food security, improved nutrition and promote sustainable agriculture’, Goal 3 ‘Ensure healthy lives and promote well-being for all at all ages’ and Goal 10 ‘Reduce inequality within and among countries” – are such important factors in people’s lives, here in Ireland and around the world.

ATD Ireland is trying to build up a sense of awareness around these goals by reaching out to people from communities that are often the most left behind through our LNOB conversations. Our goal is both to bring awareness and to hear directly from these people, the importance of what the SDGs mean to them and in what ways they want to improve their community to ensure no one is left behind.

This gives people (often for the first time) an opportunity and a real chance to grab hold of some political power/influence. This promise therefore can be used as a way of putting the politicians in check!

What are we ATD doing to try and keep that promise?

During this current co-vid crisis, we are seeing first hand – signs of growing inequalities and discrimination as well as deep isolation and misery. The families and individuals we are working with, tell us that there is a lack of communication as well as a lack of support and that life is becoming more and more difficult. Families already struggling from hardship, poverty and socio-economic discrimination are dropping further and further behind and getting forgotten completely.

One of our efforts to reach out and develop something during this difficult period was the creation of our new ‘Keep Connected’ page on Facebook. This was a simple idea of trying to be there for people by sharing news but also bringing some humanity and beauty into people’s lives. Even in the virtual realm – we were sharing art, music, stories, jokes, poetry and creating a space where people could share and reflect on things happening in life if they wanted too. Our aim was really for people to know we were there!

‘Even though the curtains might be pulled closed there is always a crack where light gets in’ ….  We wanted to be that lifeline if needed.

This also led to the creation of a private writer’s corner online called ‘Lockdown Liberties’ – where a small group began to share personal writings, poems, hopes, dreams and reflections on life. The peer support nurtured between the writers was really strong. We encourage each other to write and continue to share some very powerful poems.

This smaller group was formed as a result of people reaching out to others outside of their usual circles due to originally being part of the Keep Connected Facebook page. Through this, we discovered a lot of people who were experiencing a sense of being left behind during the lockdown situation – and so in reaching out to others within our community, the writers corner was setup. This small action in itself adheres to the Leave No One Behind principle and has led to an increasing amount of interaction with people who were in isolation and being over looked in the midst of the restrictions imposed upon society during this co-vid period.

Through the medium of writing i.e. poetry, short stories and personal reflection using the creative process – we were able to reach out to and engage with a lot of new people unknown to us prior to the lockdown. We ceased this opportunity to put into practice the promise contained with the SDGS to Leave No One Behind which has proven to be a successful learning process. As small as our action was at the offset – it has really grown into something far bigger than first thought. It has inspired others both in Ireland and further afield to reach out and to build connections within their own networks and further afield using social media platforms etc.

We discovered by practicing the promise of LNOB and reaching out to others that we have grown a small but reasonable sized virtual village, that is increasing its contacts through social media on a global scale. This shows the importance of practicing what you preach. The promise works, if you work with it!

Andrew one participant says: “With the keep connected page and the lockdown liberties group; I developed a new skill and a love for writing poetry. Writing poetry – it got me out of my head where I was imprisoned for a while and it let me focus on what matters in my life. Without these two groups, I would have been a prisoner to my mind”

These projects are a way to put into action the ‘Leave No One Behind Promise’ in a context where many are struggling with isolation and hardship. Let us keep hold of the hope and belief that the SDGs and the Promise to Leave No One Behind can be a way to improve life for all – here in Ireland and in the wider world.

In the video below let us hear why the 17 Sustainable Development Goals #SDG​ and the vital promise to Leave No One Behind are key to real societal change. Here is a video made up of one quote per goal from our ATD community for each SDG and what it means in context to them.

The Leave No One Behind promise presents the unequivocal commitment of all UN Member States to eradicate poverty in all its forms, end discrimination and exclusion, and reduce the inequalities and vulnerabilities that leave people behind and undermine the potential of individuals and of humanity as a whole.

LNOB not only entails reaching the poorest of the poor, but requires combating discrimination and rising inequalities within and amongst countries, and their root causes.  A major cause of people being left behind is persistent forms of discrimination e.g. gender discrimination, which leave individuals, families and whole communities marginalized and excluded. It is grounded in the UN’s normative standards that are foundational principles of the Charter of the United Nations, international human rights law and national legal systems across the world. 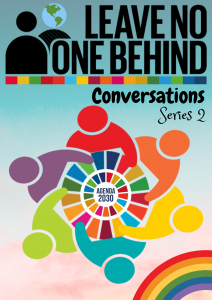