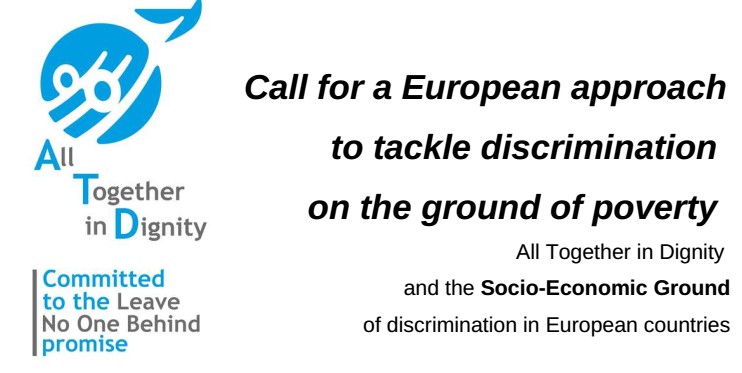 On Thursday 23rd March, Equinet and the Irish Human Rights and Equality Commission (IHREC) are co-organising in Dulbin a conference on poverty and discrimination.

This conference will aim to review the links between poverty and discrimination, take stock of recent initiatives introducing socio-economic status as a discrimination ground and discuss what can be done at EU and national levels to break the vicious cycle of social exclusion.

The conference is timely as it takes place at a time when the Irish Deputies Fiona O’Loughlin TD and Jim O’Callaghan TD introduced a Private Bill to the Irish Parliament. The amendment aims to prohibit discrimination on the basis of a person’s social and economic background.

ATD Ireland together with ATD Europe is currently campaigning for a Europe wide recognition of the socio-economic status as a discrimination ground. More about this work here!

More about the work of ATD:

In France: France Bans Discrimination on the Grounds of Social Conditions

In the Netherlands:  A delegation from ATD Fourth World is received by the Institute of Human Rights in The Netherlands.

Background of the conference

Combating poverty is a key undertaking of the European Union in the field of economic and social rights. This is reflected not only in the European Pillar of Social Rights, but also in fighting poverty and social exclusion being one of the five targets of Europe 2020, the EU’s ten-year jobs and growth strategy. Further to this, one of the 17 Sustainable Development Goals of the United Nations is to end poverty in all its forms everywhere.

Equinet’s earlier work on ‘Addressing Poverty and Discrimination: Two Sides of the One Coin’ and ‘Equality Bodies Contributing to the Protection, Respect and Fulfilment of Economic and Social Rights’ demonstrates, based on the experiences of equality bodies, the inextricable link between discrimination and poverty. Most equality bodies have a broad mandate covering discrimination not only in the field of employment but also in fields such as housing, access to education, healthcare and other services where a number of grounds intersect with socio-economic status as a cause of social exclusion. Important intersections include the grounds of race and gender.

This conference will aim to:

The 4 tests for #Budget2018 by the Community Platform