“Ending poverty in all its forms everywhere” – the overarching goal of the 2030 Agenda for Sustainable Development – reflects the growing consensus on the need to consider other dimensions, beyond monetary ones, when thinking about poverty.

To improve the global understanding of multidimensional poverty, the International Movement ATD Fourth World, together with researchers from Oxford University, launched in 2016 an international research project in six countries (Bangladesh, Bolivia, France, Tanzania, the United Kingdom and the United States) to identify the key dimensions of poverty and their relationships.

The project is based on a “Merging Knowledge” methodology, in which practitioners, academics, and people facing poverty are co-researchers. In this methodology, the different types of knowledge resulting from action, academic research, and life experiences are built first in an independent way through meetings with peer groups, then merged to enrich one another, resulting in new insights about the reality of poverty. This process has led to the identification of 9 key poverty dimensions that, despite differences in the daily lives of poor people across countries, are surprisingly similar.

The project, funded by the French Department of International Development (AFD) and others, reached completion.

During a conference organised by the OECD Centre for Opportunity and Equality and the International Movement ATD Fourth World,  the authors presented national and international outcomes of this research, where the insights and questions raised by the project was shared and discussed with participants. The conference aimed to establish a dialogue among the six National Research Teams and participants on how to move forward in the areas of measurement, policy and action.

For three years, people living in poverty, professionals and academics worked together to clarify how we understand poverty and its multi-dimensional aspects. Research teams defined nine interdependent dimensions common to all six countries. The long-term goal of this project is to help develop better policies to eradicate of poverty. 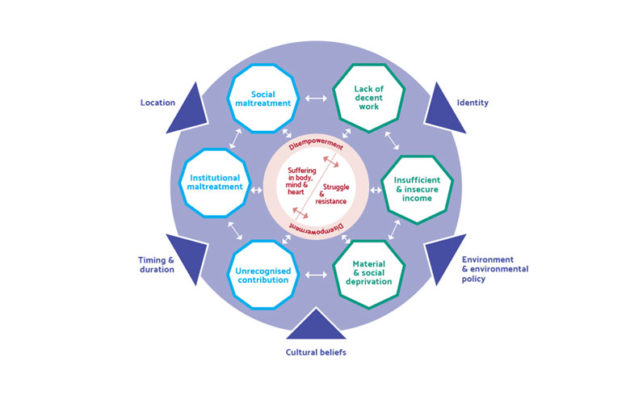 Download the full “The Hidden Dimensions of Poverty” report.

With the financial support of