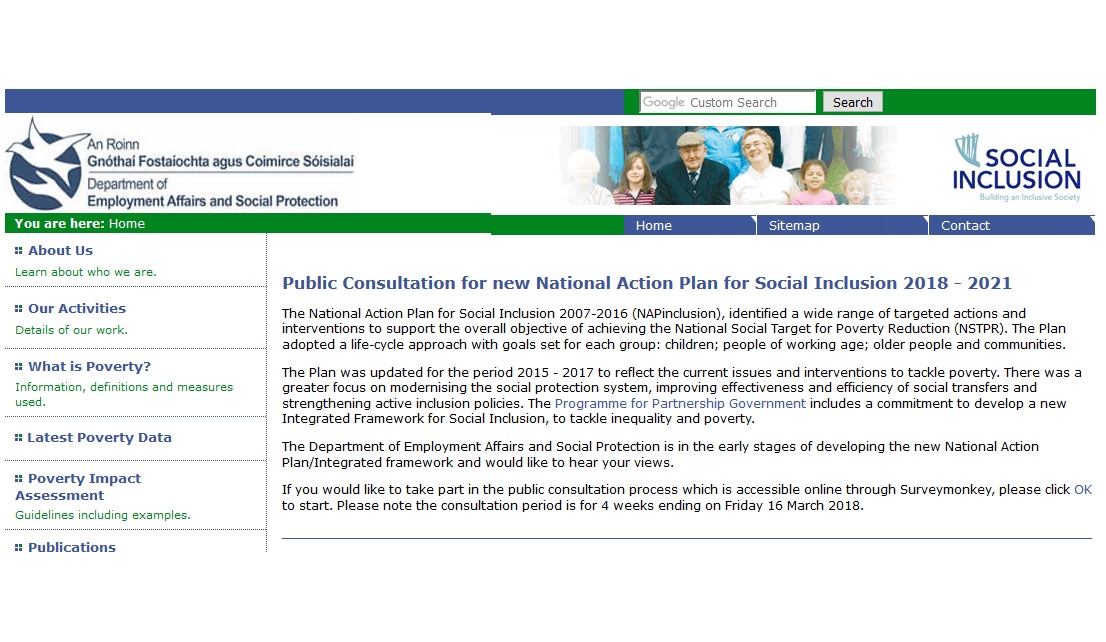 On 16th February 2018, the Irish Government launched its public consultation on a new National Action Plan for Social Inclusion 2018-2021. This move follows the commitment included in the Programme for Partnership Government to develop a new Integrated Framework for Social Inclusion, to tackle inequality and poverty.

The former plan quickly named NAPinclusion (National Action Plan for Social Inclusion 2007-2016 and update) identified a wide range of targeted actions and interventions to support the overall objective of achieving the National Social Target for Poverty Reduction (NSTPR). It adopted a life-cycle approach with goals set for each group: children; people of working age; older people and communities.  The focus of the last implementation years of this plan was on modernising the social protection system, improving effectiveness and efficiency of social transfers and strengthening active inclusion policies.

Now the Department of Employment Affairs and Social Protection is in the early stages of developing the new National Action Plan/Integrated framework and would like to hear views of the civil society (citizens and organisations). The consultation is by Survey Monkey with a deadline of Friday 16th March. A PDF of the Survey questions is available here to assist with the filling in the online survey.

Have your say! And join the ATD Walk As One initiative to make the next plan the best ever! 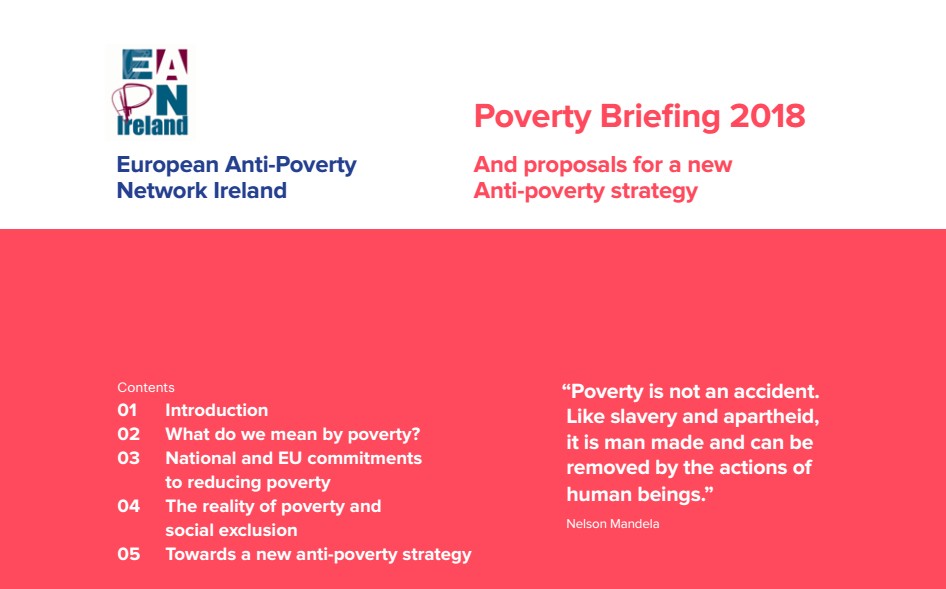 A few days after the launch of the consultation, EAPN Ireland (member of the European Anti-Poverty Network) published its Poverty Briefing 2018 and proposals for a new Anti-Poverty Strategy.

A Poverty Briefing published today by the European Anti-Poverty Network (EAPN) Ireland has highlighted that if the Government wants to tackle the high levels of poverty in Ireland it needs to take action at the highest level and across all Government departments.

Despite some recent progress the Government is failing in its commitments to tackle poverty, with some groups in society at particular risk. There are currently 394,900 people in consistent poverty in Ireland, including around 141,700 children. Paul Ginnell, the Director of EAPN Ireland stated that “The last social inclusion plan completely failed as the commitment to make it a priority from the top of Government wasn’t there. This time the Government must be serious and the new plan ambitious in its goals and implementation if we are ever to have any chance of eradicating poverty and its causes from our society”.

The Poverty Briefing 2018 presents up to date information on the levels of poverty and the issues behind them. It spells out many of the specific issues which impact directly on the lives of people. These relate to inadequate income, lack of access to a range of core services such as health, housing and literacy, numeracy and childcare and the need for quality employment for those who can work.

Finally the Briefing calls for a commitment and action across Government to address poverty and its causes and as the Government begins its consultation on a new social inclusion plan. It outlines a range of proposals which an all Government strategy needs to implement if it to be serious in tackling the causes of poverty. The proposals are for:

Download the Poverty Briefing 2018 and proposals for a new Anti-Poverty Strategy.

How Can Humanitarian Aid Better Reach Those Who Most Need it?