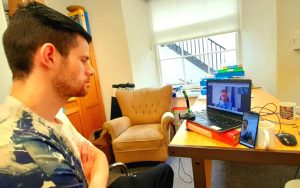 On 16th June, the working group on introducing socio-economic status into Irish equality legislation, of which ATD Ireland is a member, met over Zoom with Minister for Children, Equality, Disability, Integration and Youth Roderic O’Gorman.

the logos of the working group

The working group is made up of ATD Ireland, the European Anti-Poverty Network Ireland (EAPN Ireland), the Independent Living Movement Ireland (ILMI) and the Irish National Organisation of the Unemployed (INOU). The working group has been campaigning for the introduction of socio-economic status as a ground for discrimination in Irish equality legislation for several years. In their letter with Minister O’Gorman asking for a meeting, the working group wrote:

“The absence of this ground means that many people continue to experience discrimination in accessing employment, goods and services and have no protection under the law. Apart from the material loss this has on people, it also has a deep impact on the dignity and self-belief of the victims, as well as impacting on their families and communities”. 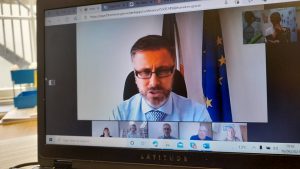 Central to the meeting was ATD community activist Andrew. He brought a voice of direct lived experience of socio-economic discrimination to the meeting. As well as his own experiences, Andrew read the accounts of others in the ATD community who have lived with socio-economic discrimination, acting as a custodian of their accounts. He also spoke about findings from ATD’s 2019 report on Socio-Economic Discrimination, ‘Does It Only Happen To Me?’.

“When you live in poverty and socioeconomic discrimination you don’t have any real protection, even though we have nine other grounds in the equality legislation, we are not protected, we constantly fall through the cracks. Things can’t move forward until we bring in this tenth ground.” 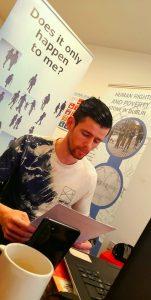 He finished his address with the following:

“”Even the dogs in the street know that poverty and socio-economic discrimination exist. Class discrimination is not new, it has always been around. There are many reports as well as academic evidence and statistics out there- locally, nationally and internationally, that allude to these issues. We really need to act together for change and make us again feel proud of our country. Minister O’Gorman, I see you are the Minister for children and young people, can you help us by supporting the campaign to bring the tenth ground into the equality legislation so all of our children have a better future, we are very ready to support this.”

Andrew recalled of the meeting: “I offered to go and speak to other TDs and Ministers and support the Minister where needed.”

The minister was very struck by Andrew’s presentation. He made a commitment to progressing a review of the equality legislation and the meeting concluded on a positive and constructive note. On 22nd June, the Minister announced that he had received Cabinet approval for the first full review of Irish Equality legislation since the laws were passed twenty years ago and that the review will include the introduction of ‘protections against discrimination on the basis of socio-economic status and gender identity.’ 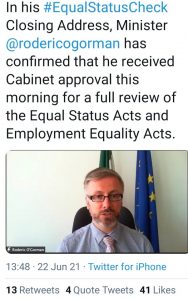 “The Equality Acts send the message that discrimination will not be tolerated.

After 20 years, the time is right to examine them and ensure that the legislation is as effective as possible in combatting discrimination and promoting equality.” 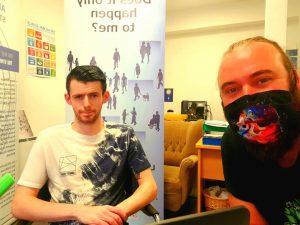 Andrew was pleased with the announcement: “Just amazed at the fact that me and my wife were a part of this happening. Hopefully now it’s a step in the right direction against being discriminated against due to where you’re from or what background you are from.”

He said of his part in the meeting: “I think its great to get the opportunity to represent people, me out of all people to be a footstep in the right direction, hopefully one day I will be part of history, because of my past it’s great to stop looking in the rear view mirror and keep my eyes on the road ahead, it’s not just my story, it’s history, his/her story, everyone’s story.”

A working group member remarked of the meeting: “I think we covered everything well and Andrew’s contribution certainly added great power to the message we were trying to communicate. The Minister came across as committed.”

ATD Ireland are very proud of Andrew’s contribution to the campaign and hope that the review of the equality legislation will see socio-economic status being added as a ground for discrimination.