On March 15th 2019, join and support the Global Climate Justice Strike For Future!

On March 15, along with NGOs in 40 countries on all continents, we will support the call to the youth and all citizens of the world to join the Global Strike For Future!

Act on climate never without,
or against, people living in poverty!

In a context of successive international meetings about the new Sustainable Development Goals (SDGs) and reducing the negative effects of global warming, ATD International has upped its advocacy to emphasize the inextricable link between climate action, sustainable development, and poverty eradication. From action and research on the ground, we have issued two memorandums and a series of short videos illustrating these links.

ATD International’s position paper, “Tailoring Climate Change Response Measures to the Needs of the Most Vulnerable” points out clearly:

“If governments fail to combat climate change with people living in poverty, it is very likely that response measures will work against these vulnerable communities.”

This statement reminds stakeholders that a framework with international consensus exists already in the United Nation’s Guiding Principles on Extreme Poverty and Human Rights.

ATD’s more in-depth memorandum, Taking seriously the commitment to “leave no one behind” in the SDGs and the fight against climate disruption, further proves the effectiveness and necessity of including people struggling daily to overcome poverty, when designing development strategies and climate action. A series of short video clips illustrate each of ATD’s five main recommendations, from reaching those deepest in poverty, to promoting green jobs and training. 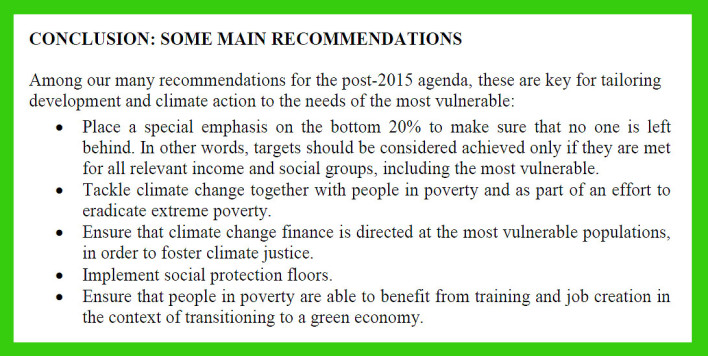 Why is the Leave No One Behind Promise important to us?

Leave No One Behind Series 2!