“I almost got tears in my eyes when Jacob was making these comments… he doesn’t want anyone else to experience
what he has gone through
and is empathetic towards others in his same situation.”

It was a beautiful Saturday afternoon as I walked slowly through the neighborhood of Ocean Hill getting ready for the Street Library I helped with this summer as an intern. Some of the women were chattering away and making the most of the weather. An old man was wearing a look of boredom as he sat on the benches among his friends. A small group of children were already at the playground chasing each other around while some of the older boys played basketball. 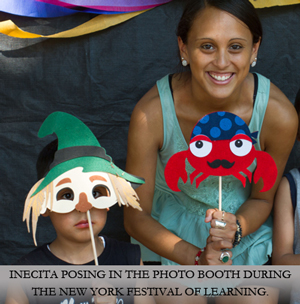 That moment felt almost peaceful and relaxing. I knew that nearly everyone I saw lived in some kind of poverty, yet they did not seem beaten down by their circumstance. They appeared to create a sustainable life despite it that filled me with hope. I felt like I was witnessing a parallel existence — one I was aware of as a young girl living in the United States my whole life and one I had rediscovered after being exposed to the reality of poverty in my own backyard. I already knew the next few hours would transform my understanding of social responsibility, but I had no idea how an encounter with a little boy in the park would change my understanding of poverty.

His name is Jacob and he was reading The Giving Tree. He read the entire book to me and at the end of it we had a short conversation about our thoughts on the boy in the story. I felt that the boy had taken advantage of the tree by only using it when he needed something and did not seem appreciative of all the resources it provided him. Jacob on the other hand, had a completely different reaction. His response was the following: ¨I don’t think the boy was taking advantage of the tree because he needed help and didn’t have anywhere else to get his stuff. The tree seemed happy to help him out. If I were the tree I would have done the same thing. I would help anyone who is struggling and give them all my stuff if they need it.¨

I almost got tears in my eyes when Jacob was making these comments because I could tell he was being genuine. However, after hearing his response I realized that he could relate to the boy in this book. I assumed that since Jacob himself is living in poverty, he knows what it is like to not have that much “stuff” and understands the kind of situation the boy is in. He doesn’t want anyone else to experience what he has gone through and is empathetic towards others in his same situation.

What I saw on that sunny day in Ocean Hill Park were people living their lives, participating in an arguably efficient informal economy and finding ways to make it from one day to the next with a positive attitude. But the reality is that they have little to nothing. They often do not have running water in their homes. The children are exposed to street and gang violence. They do not have any resources to deal with sickness — or a healthcare system to rely on. They have what they need to survive that day and hopefully the next, but that is it.

My plan in working with the public housing community in Ocean Hill was to learn about poverty and to better understand ways to combat it. However, I have left with something much deeper — a better understanding of what it means to be human. When people have nothing, their humanity is not hidden behind a mountain of fashionable clothes, fancy cars, expensive toys or big homes. Their humanity is on display for everyone to see. If you slow down long enough to listen and build relationships with the people in these communities they will happily take the time to tell you that every human has a story filled with great moments of joy and great moments of sadness. Ultimately, the sharing of ideas that happens during these daily exchanges around the world, day in and day out, compels them to find a way to capture those moments — visually and emotionally — in order to pass this story on to others.

Inecita recently completed an internship with our New York team. ATD internships give people an opportunity to experience the work we do first-hand, changing perspectives on poverty in their own country.

If you think you or someone you know would be interested in applying for an internship.

If you are in the USA,  visit: http://www.4thworldmovement.org/join-us/internships/

A new year with a new Leadership Team for ATD International