Because ATD Fourth World’s international center is located on the outskirts of Paris, messages of solidarity have poured in from our members and friends since the attacks on November 13.

Some messages are from people in Beirut, still reeling from the attack there on November 12. Others made connections to situations they lived through in the United States on September 11, 2001, in Vietnam during the war there, or in Rwanda during the genocide.

One of our active members in London is a woman who lives in poverty. She sent us many messages over the weekend, first writing, “Please can someone send us news of all of ATD’s volunteers, supporters and friends? You are all our family too.” Later, she wrote:

It’s heartbreaking how many lives were lost or shattered. I am praying for the victims – and also for those who may be victimized in the days ahead, as happened in London some years ago with a backlash against innocent people. We who reject racism and hate-mongering are ready and waiting, united and strong. With every attack, they make those of us who want peace stronger in our unity. The peaceful majority of Muslims cannot be blamed for the actions of a violent few. The Qur’an is a book of peace. May peace and light prevail over hatred and fear.

In Paris, we were touched to realize how many people opened their doors to strangers late on Friday night and into Saturday, when crowds of people were stranded by the sudden curfew. Many individuals used social media to invite others into their homes with the hashtag #PorteOuverte (OpenDoor). One #PorteOuverte tweet informed people that any Sikh Gurdwara (temple) in Paris is always open to host anyone in need of a bed. It was shared some 12,000 times that night. Seeing this, one of our friends also sent on the message, “Kindness spreads faster than hate.”

Messages have poured in from friends in Egypt, Palestine, the Central Africa Republic, and many other places sending, as one said, “all the blessings and hope we can muster.” We also heard from a young woman in Kenya, where a terrorist attack in April killed 147 students.

She wrote: “Peace to Paris, peace to the Middle East, peace to Syria. Peace all over, and peace within. Put your hands on your heart and send out healing energies. Don’t feed the panic. Feed peace.” A few hours later, she added, “I only now heard about the terrorist attack in Beirut two days ago. Sending light and love to the people of Lebanon whose lives are important and worthy of acknowledgment.”

As social media began to erupt on the question of selective attention and why the Paris attacks received so much more attention than those in Beirut, Kenya or elsewhere, we heard something different from a young woman in South Africa. She is engaged in a social justice movement in a very low-income township where violence is omnipresent. She wrote:

Lebanon and Paris are both in tears and mourning the dead. In some countries, attacks have become normal, and that’s tragic. To say my piece: it’s not a great idea to compare tragedies and question people’s reactions. The focus should be on comforting those in pain. When death hits anybody, the humanity in us should rise with those left behind and not be buried with the dead. We see that rising of humanity in the fact that so many people have chosen these days to share again the words of Dr. Martin Luther King, Jr. which were first sent to us from Kenya the day after the attacks in Paris: 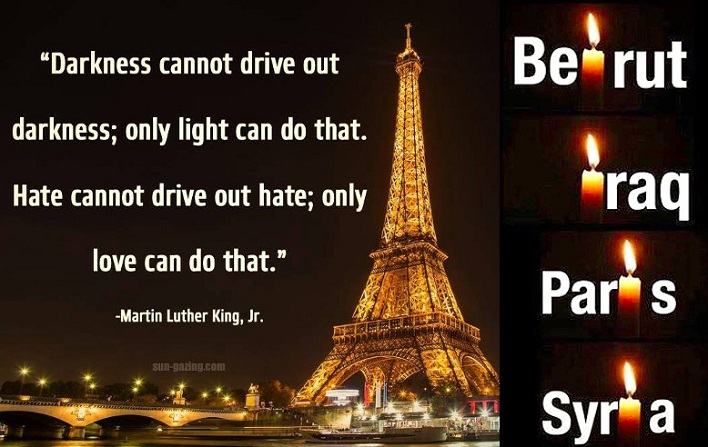 Living the legacies! Ending Poverty with Mandela and Wresinski