12 hours before the end of 2015, the European Year for Development, and 12 hours before the official start of the 2030 Agenda in 2016, ATD Ireland launched a #GlobalGoals booklet. The booklet gives an account of the social media campaign: “The Roles We Play, Here and There” funded by an EYD2015 grant! 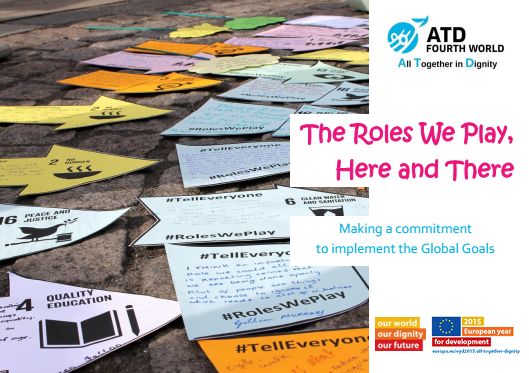 As 2015 comes to an end, and with it the 15-year cycle of the anti-poverty Millennium Development Goals (MDGs), the United Nations officially will usher in – on 1 January 2016 – an even more ambitious set of goals to banish a whole host of social ills by 2030.

“The seventeen Sustainable Development Goals (SDGs) are our shared vision of humanity and a social contract between the world’s leaders and the people,” UN Secretary-General Ban Ki-moon said of the 2030 Agenda for Sustainable Development adopted unanimously by 193 Heads of State and other top leaders at a summit at UN Headquarters in New York in September.

“They are a to-do list for people and planet, and a blueprint for success,” he added of the 17 goals and 169 targets to wipe out poverty, fight inequality and tackle climate change over the next 15 years.

The 2030 Agenda for Sustainable Development calls on countries to begin efforts to achieve the 17 SDGs over the next 15 years. The goals address the needs of people in both developed and developing countries, emphasizing that no one should be left behind. Broad and ambitious in scope, the Agenda addresses the three dimensions of sustainable development: social, economic and environmental, as well as important aspects related to peace, justice and effective institutions.

The mobilization of means of implementation, including financial resources, technology development and transfer and capacity-building, as well as the role of partnerships, are also acknowledged as critical.