From January 2019 to September 2019 ATD will carry out a project exploring the issue of socio-economic discrimination in Irish public services and in every day life.

A person’s socio-economic status is not currently recognised as a ground upon which a person might be discriminated against, under Irish equality legislation.

The first step of the project is to collect anonymous real life stories to showcase how this type of discrimination or unequal treatment is unfortunately too common and needs to be recognised within legislation. 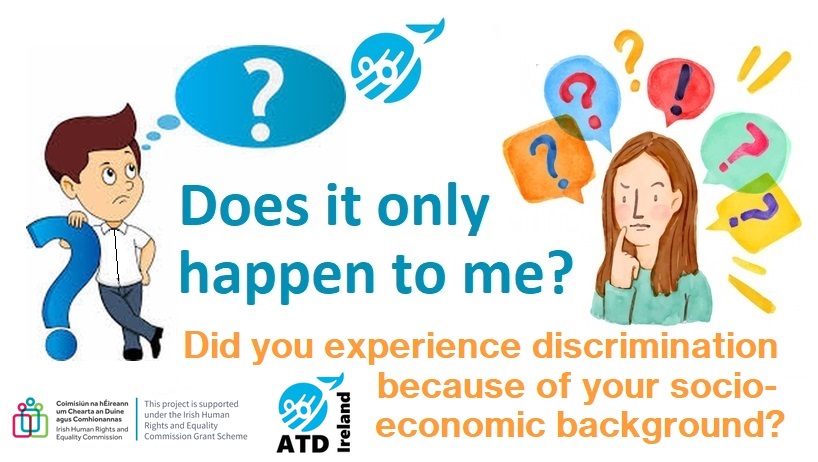 What is socio-economic discrimination?

Discrimination is when people feel like they are being treated less favourably than others, for example, because of their age, gender, religion, ethnicity…

Today in Ireland several grounds of discrimination are officially recognised within equality legislation: it is illegal to discriminate against people because of their age, gender, sexual orientation, race, disability, religion, civil status, family status and membership of the Traveller Community.

Since 2016, another ground has been added to cover housing assistance payments (HAP). This means that people who feel discriminated against under one or more of these grounds can bring a complaint to the relevant legal body (see www.ihrec.ie for more information on how to make a complaint).

However, ATD Ireland, along with many other organisations such as EAPN, INOU, the members of the former Equality and Rights Alliance (ERA), believe that one ground is missing from Irish legislation. That missing ground is called “socio-economic status”.

What does it mean?

Socio-economic status or background may sometimes be referred to as social class based discrimination. For instance, someone could feel like they are being treated less favourably than others by the Gardai because of where they live.

“My son was going to a football thing… And he stayed up in Crumlin in his friends… It was seven o’clock in the morning anyways and he was running through the park to get to the coach, and like that, he was stopped at the bus stop, and they searched his bag, his schoolbag… And they searched everything and like he ended up missing that, and came back to us sobbing, saying, “I done nothing wrong!” and not even that, like he was quite frightened by the whole experience. And as well as that it kind of turned him off the Guards.”

Other people recalled being treated differently at school because their families could not afford to buy school books, or how they were asked to leave class because they were not wearing the ‘right’ shoes and how they felt belittled and embarrassed by the attitude of teachers. This leads to lack of confidence that is often carryout out through adult life as well.

“Belittled… some people can make you feel very small, so you can just say ‘that’s how tall I am, so just stand up’… to belittle someone is to really put them down.”

Sadly, many have stories like these that showcase ways in which people are excluded or not treated with dignity and respect. But because socio-economic status is not covered in equality legislation, this kind of discrimination often goes unnoticed and cannot be reported legally.

Impacting the delivery of the Public Sector Duty

In addition to allowing victims of discrimination to file a legal complaint, a change in legislation will have an impact on what is called the “Public Sector Duty”. What does this mean?

The Public Sector Duty is a statutory obligation for all public bodies to work towards the elimination of discrimination, promote equality, and protect human rights in their daily work. This Duty applies to people working in public services, service users and more generally everyone impacted by policies coming from public bodies.

Where do we go from here?

We know that this change in legislation will not mean that socio-economic discrimination will disappear tomorrow, but we see this as a necessary first step in recognising that this kind of discrimination does exist and needs to be challenged if we are to live in a society which treats everybody with respect and dignity.

You want to learn more about this project
or to share a story?

We are looking for people from all around the country  to take part in this project.

If you have a real life story of a time where either you, or someone you know, had an experience of being discriminated against, and if you felt that this discrimination was because of your socio-economic status, then we would love to hear from you.

This discrimination may have taken place when dealing with a public service or in another situation of every day life!

All the stories collected and possibly published (with individual consent) will be kept anonymous to ensure the confidentiality participants.

If you are interested in taking part in this campaign to introduce an additional protection against discrimination into Irish law, then feel free to get in touch with us!