On the 15th October ATD Ireland Community activist Andrew along with Mark Hogan will be travelling to New York to the United Nations for the Commemorative Event to mark the 30th anniversary of the International Day for the Eradication of Poverty 2022.

Andrew has been invited to be a keynote speaker as an expert through his lived experience of poverty.   Earlier this year Andrew was invited to join the International 17th October committee.

Andrew will be giving his address alongside other activists from across the world with lived experiences of poverty and hardship.  He will also be speaking alongside representatives from the United Nations, UNICEF, the International 17th October committee and ATD Fourth World.

The international theme for the 17th October this year is “Dignity for all in practice: the commitments we make together for social justice, peace and the planet”. 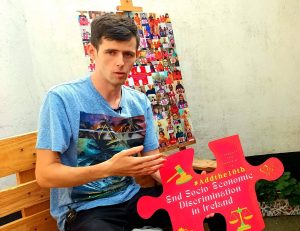 See below Andrew’s important speech which he will deliver on Monday 17th October, which he wrote based on the concepts of dignity, poverty and socio- economic discrimination.

Can you imagine a world where the dignity of everyone is respected in practice, as is the international theme for 17 October this year? Can you just imagine living in poverty for 35 years or longer, like I wasn’t even born, my mother lived in poverty and it passed onto me so it’s way longer.  That is the reason I am here; to try and show ye that even though I have gone through this that I still have a voice and I intend to use it so my kids don’t have to go through what I have gone through.

I live by this quote I have made it my mantra, “Wherever men and women are condemned to live in extreme poverty, human rights are violated. To come together to ensure that these rights be respected is our solemn duty.”

Wherever we are in the world, if we are to improve access to rights, we need to take account of the hidden dimensions of poverty. The institutional maltreatment, the poverty based discrimination, the shame and stigma of being poor are all obstacles for accessing rights. In Ireland we are currently engaged in a campaign to include poverty-based discrimination as the tenth ground of discrimination in Irish equality legislation so that people experiencing socio-economic discrimination have a right to legal redress and protection in the law.  To discriminate against someone because of their socio- economic status is to disrespect the inherent dignity that we all hold within us.

Also, we have to remember that Non take up of rights is neither a lack of interest nor a personal failure of the rights holders but the lack of information about their existence or excessive administrative barriers in accessing these rights.

It is important that if this law is introduced in Ireland it also must be fully implemented, as passing a law itself is not enough.

Can you imagine a world where people don’t have to worry about poverty or worry about getting a job because you are from a run-down area.  Imagine all the lives you could save, because personally speaking when a man can’t provide for his family it starts to worry him and in today’s society… men are told and believe that they can’t be weak they can’t show emotion and that is why the male suicide rate is so much higher than any other sex, because they don’t open and talk about the stresses of life, they hold it all in.  So I go back to my original statement; imagine having a law in place where socio economic discrimination isn’t allowed, I bet the count for male suicide rates would go down, I can almost guarantee that it would.

When I started with ATD I was really nervous and shy because I felt my voice wasn’t important. I thought that my poverty was just the normal until I seen the unjust system that we live in … I used to stutter a lot when I spoke.

Then I became a father and that gave me confidence to speak out about the things that matter in life and I was blessed to be given so many chances to make a difference. You see once I have breath in my body I will continue to fight for a better future not just for my kids but for all kids.

So if anyone sees me speaking and you feel you don’t have a voice let me tell you this everyone has a voice especially those who have gone through poverty.  I feel the only way out of poverty is to consult with the experts on poverty, the experts on poverty are the ones that are living in poverty.  The only way I feel we can eradicate poverty is by including them at the tables of power such as this one, so on behalf of everyone that is going through poverty I would just like to thank you for this opportunity to speak on such a high platform.  Thank you very much.

To watch the livestream of the event in New York register here: https://IDEP.eventbrite.com

We are all very proud of Andrew and wish him and Mark the very best of luck during their time in New York.  It is very significant that Andrew has this opportunity to share his wisdom on such a big platform.