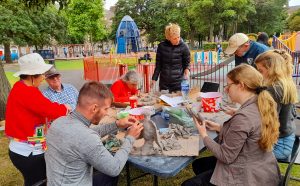 Speaking of another similar creative project, one participant said;

“I could speak of my issues through metaphors, I could hide behind things.  I could say stuff about my life but, make jokes or make it funny or whatever and it didn’t bother me as much when people read it.”

The pieces created also opened up the exploration of other themes such as access to nature, racism, mental health and the media and how these issues are related to socio- economic discrimination.  It gave the opportunity to shine a new perspective on the nature of discrimination, and the people who experience its worst effects. 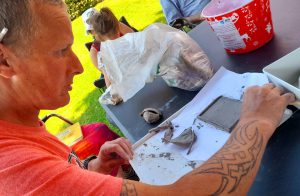 The volcano created by Andrew, Ciara, Juliette, Paul and Terence demonstrated the impact of socio- economic discrimination on mental health.  It portrayed how being forced to bottle up negative emotions, experiences and trauma will ultimately erupt and often lead to hatred and division. However, a heart contained within the volcano demonstrated that such a repressive urge can be counteracted through love and care for one another.

Philip felt that his “broken picture represents society and how people who are struggling are often misrepresented in the media: the picture is always off.” 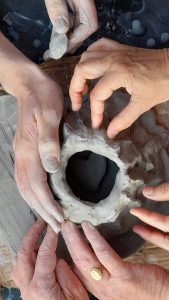 Ultimately these workshops showed how creating art can inspire interesting conversations and can highlight the multitude of different angles which are needed to fully address socio-economic discrimination.

The use of art was also an important tool to reach the general public who may be more inclined to engage with an art exhibition than an academic paper.  In order to truly open up the conversation on socio- economic discrimination it is important to reach not only outside our own circle but also beyond the government and political level.  For real change to happen we have to bring these concepts into the public consciousness and art has always been an important vehicle for communicating new thoughts and ideas.

Further, discussing the topic of socio- economic discrimination through art functioned as a way of not only reflecting on the issue but also of taking action.  Throughout the project we took heed of the fact that art is often not an accessible space for those with an experience of poverty.  Creating art and having that art displayed in an exhibition was our way of breaking down that barrier.

The exhibition and workshops was also an opportunity to give something back to the participants rather than it being a one sided exchange.  It is important to recognise the effort for the participants to engage in a project such as this and value that contribution.

“What I found interesting about this work was the duel nature of the connections between the group… we were connecting in a very creative way with our hands and minds and producing some very good clay expressions, while simultaneously we were deep in thematic discussions sharing intimate thoughts and experiences…. all in a very respectful and dignified way.” Dann

“The workshop really brought people from very different walks of life and backgrounds together and we created, learned from each other and collaborated together… this is a reflection of what needs to happen to build a better society.”  David